Homeownership rates dropped to 65.2 percent in the U.S. for 2013s first quarter, the lowest rate in nearly 20 years, according to the U.S. Department of Commerce. RealtyTrac, a firm specializing in foreclosure data, said in its 2013 U.S. Home Equity & Underwater Report that 9.3 million Americans owe more on their mortgages than the house is worth. In other words, homeownership will continue to plummet for the foreseeable future. 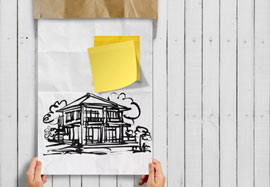 Most of the predatory practices by lenders during the subprime boom that crashed the housing market in 2008 have been outlawed by regulatory reform. The Consumer Financial Protection Bureau was created as a result of the Dodd-Frank Wall Street Reform and Consumer Protection Act of 2010, and has since enacted several rules banks must follow. The no-brainer rule that went into effect at the beginning of this year, known as the Ability-to-Repay and Qualified Mortgage rule, now requires all lenders to make “good faith” efforts to determine a borrower’s ability to repay a loan. Even if you believe your financial situation is sound enough to buy a home, the decision may be beyond your control. The average FICO score for all first-lien closed mortgages in March 2014 was 725, according to Ellie Mae. That means even billionaire Warren Buffet, and his 718 FICO score, wouldn’t fit the typical profile of a qualified borrower.

Here are a few essential factors to be considered when determining if you’re ready for the long haul of homeownership.

One of the most influential factors in mortgage underwriting is debt-to-income ratio. DTI is a simple formula that adds up all of your monthly recurring debt and divides it by gross monthly income. For instance, if your rent, car payment, insurance, and all other monthly bills total $1,100, and your gross monthly income is $3,000, your DTI is 37 percent.

New mortgage rules have a soft requirement of a 43 percent or less DTI. Lenders are allowed to circumvent this rule if the borrower possesses significant assets that act as defacto collateral. Another underwriting factor is your front-end ratio, or the percentage of gross income that will go towards your total mortgage payment if approved. Ideally banks look for a 28 percent or less front-end ratio.

Potential borrowers should address both of these numbers long before stepping foot into a financial institution seeking a mortgage. Eliminate as many revolving payments as possible, starting with the oldest accounts. This will not only improve your DTI, but also your FICO score. Payment history, amounts owed, and account age account for 80 percent of the aggregate score.

Once this DTI is improved, the next step is getting prequalified so when that dream house shows up, the process can move along more quickly.

There are some cities that are simply better for potential buyers to get the best price on a house based on local economics. Total housing inventory in the U.S. rose to 2.28 million from April to May of this year, a 2.2 percent increase, according to the National Association of Realtors.

Potential buyers are best served sticking to markets with high inventories, as prices will generally reflect this condition. Las Vegas was already a buyer-friendly market, and saw its inventory increase 93 percent from January 2013-14. Cities such as Sacramento, California and Mesa, Arizona also experienced large increases of 82 percent and 57 percent respectively.

Inventory, however, isn’t the only factor that should be considered. Iowa, Missouri, and Kansas have some of the lowest average list prices on the market, making the Midwest the ideal region for bargain hunters, according to data by Trulia. Several of these states have programs that offer loans and grants to make energy efficient improvement on homes. The Alternate Energy Loan Program in Iowa, for example, provides loans for wind, solar, and other green energy improvements that ultimately lower utility bills.

An analysis by Trulia in February found that buying is 38 percent less expensive than renting in all of the top 100 markets nationally. Meanwhile, the Federal Reserve continues its incremental reduction of its third round of quantitative easing. The U.S. central bank now says it will stop buying mortgage-backed securities completely by October, barring any unforeseen economic emergencies.

Home ownership is still the American dream for many. But potential buyers must exercise due diligence not only by getting their financial situations to a mortgage qualifying level, but also analyze the risks involved.